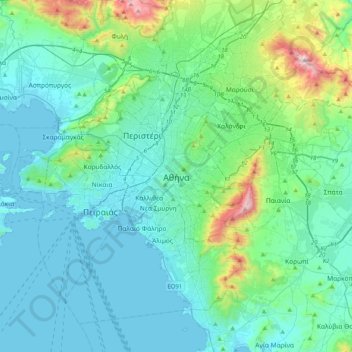 Owing to the rain shadow of the Pindus Mountains, annual precipitation of Athens is lower than most other parts of Greece, especially western Greece. As an example, Ioannina receives around 1,300 mm (51 in) per year, and Agrinio around 800 mm (31 in) per year. Daily average highs for July have been measured around 34 °C or 93 °F in downtown Athens, but some parts of the city may be even hotter for the higher density of buildings, and the lower density of vegetation, such as the center, in particular, western areas due to a combination of industrialization and a number of natural factors, knowledge of which has existed since the mid-19th century. Due to the large area covered by Athens Metropolitan Area, there are notable climatic differences between parts of the urban conglomeration. The northern suburbs tend to be wetter and cooler in winter, whereas the southern suburbs are some of the driest locations in Greece and record very high minimum temperatures in summer. Heavy snow fell in the Greater Athens area and Athens itself between 14–17 February 2021, when snow blanketed the entire city and its suburbs from the north to the furthest south, coastal suburbs, with depth ranges up to 25 centimetres (9.8 in) in Central Athens., and with even the Acropolis of Athens completely covered with snow. The National Meteorological Service (EMY) described it was one of the most intense snow storms over the past 40 years. Heavy snow was also reported in Athens on January 24, 2022, with 40 centimetres (16 in) reported locally in the higher elevations.